Automation initiatives at LAU began in 1973 (when the university was known as BUC), with a proposal to automate all university functions using the then-trendy COBOL programming language. A CIS committee was formed and produced an ambitious and elaborate design  that was then submitted to the executive council for approval. The figures below are taken from the proposal dated June 1, 1973: 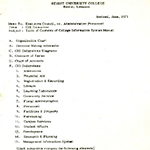 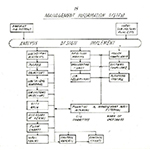 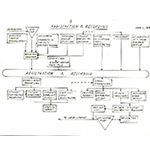 The turbulent times of the 70s delayed the initiative and actual work started in 1979. Applications went live in 1980 on the Texas Instruments (TI) 990 computer.

In 1990, BUC upgraded the servers to TI 520 and the applications were migrated to the Oracle Platform.

In 1994, PCs and desktop applications were rolled out on a large scale. The first coaxial network was laid in 1995. In 1996, email was extended to faculty and staff. A connection between the Beirut and Byblos campuses was established the same year. In 1997, IT launched internet access on campus and installed the first firewall. In 1999 the network was upgraded to 10MB and videoconferencing was launched. Also in 1999, the Oracle financials application was implemented, followed by Banner in the year 2000.

In 2003, IT was restructured into three departments: IT Infrastructure & Support, IT Applications & Solutions and IT Security. In 2011, the IT Network, Telecom & Multimedia was added as a fourth department. Since then, work has accelerated in all IT departments to provide the community with IT needs in support of the LAU mission. And the rest is history …